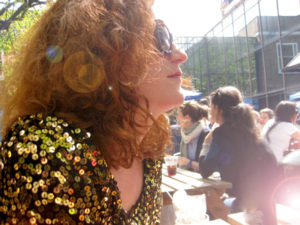 Rachelle Cousineau Floral Design began its life in San Francisco CA.
After 10 years of freelancing in London, working as a Floral Designer and Set Dresser for Film and TV, Rachelle moved to the West Coast of America for “a different scene”. She worked with some of the biggest names in event design helping create fabulous weddings and celebrity parties. It wasn’t long before Rachelle began to attract her own clients and she set up her own company. Rachelle has established her business in the South of England with studios in Berkshire and the East End of London.

“ I adore how the beauty of flowers can transform a space. Some designers use them to be cutting edge or trendy, bound and gagged in containers and forced to be a shape they were never designed to be. I love to use flowers naturally. How they would grow, in groups with enough space for them to move and breathe. Over the years I have found some amazing local growers and as much as possible I try to source my flowers from like minded people. ”